It is recommended that parents enrol their child as soon as possible after their child reaches 18 months old.

Highmount Preschool participates in the City of Monash Central Enrolment Register. The scheme allows for equitable access to kindergarten places for all eligible children within the municipality.
Enrolments for three and four-year-old educational programs are made via the
City of Monash Central Enrolment Register. Monash City Council charge an administrative fee.
All applications must be lodged before June 30th of the year prior to the relevant year of preschool.
Enrolment is done using the Monash City Council Online Portal – see Monash City Council Enrolments Page for more information.
Each enrolment application must be submitted with the required fee and proof documentation.
As directed by Monash Council, the Pre-School will initially offer places to children of residents and ratepayers in the Monash municipality whose applications for enrolment have been received by 30th June the year prior to commencement.
Parents will be invited to login in to the Parent Portal to lodge their group preferences before 30th June.

For both three and four-year old programs, where demand is higher than availability, a priority system for access has been determined. Highmount Preschool prioritises access to kindergarten places aligned to the DET “The Kindergarten Funding Guide”. Please refer to the table below. 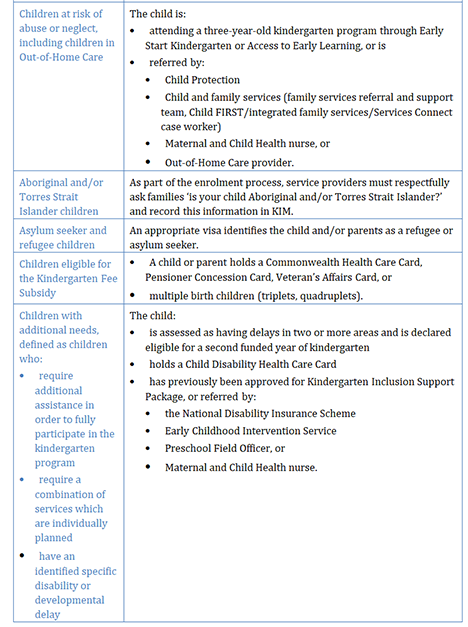 Applications are prioritised, offered and confirmed in July/August of the year prior to attendance.

Letters offering the child a place at the Preschool are emailed by Monash City Council from late July/early August, the year prior to attending. Families are required to Accept or Reject the offer by the required date.
For more information please contact the Preschool Support Officer on (03) 9518 3530 or go to the City of Monash Kindergartens Website

Once the offer is accepted from the Council, Highmount Preschool will issue a request for payment of the non-refundable deposit to confirm your child’s placement. This deposit is deducted from the term one fees.
Once the deposit payment is received a Welcome Pack is sent to you from the Preschool along with an invitation to attend our Annual General Meeting. Enrolment paperwork including the child’s Immunisation Certificate and the Child Background Information Sheet are to be lodged during the evening.

The Victorian Government passed new immunisation legislation named ‘No Jab, No Play’, which took effect on 1 January 2016.
Victoria’s “No Jab, No Play” laws are aimed at increasing childhood immunisation rates across Victoria.
Therefore, from 1 January 2016, all parents/guardians enrolling their child at an early childhood service in Victoria must provide evidence that their child is:
is up to date with vaccinations for their age OR
is on a recognised vaccine catch-up schedule OR
has a medical condition preventing them from being fully vaccinated.

As per the Victoria Government’s “No Jab, No Play” policy, ‘conscientious objection’ to vaccination is not an exemption.

This information is to be provided to Highmount Preschool as part of the enrolment process.

Enrolments are unconfirmed until an up to date immunisation statement has been provided.